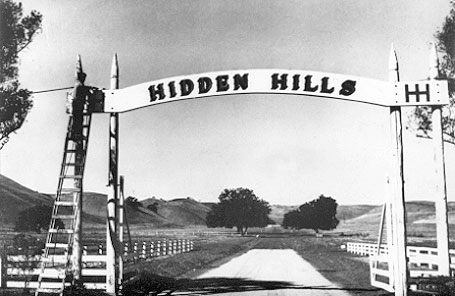 Learn more about how we got started

You may be asking yourself, why live in Hidden Hills? The answer is quite simple – you won’t find any other place quite like this Hidden Hills home community!

Hidden Hills had humble beginnings – located down a quaint dirt road, surrounded by green rolling hills and oak trees. Developed by A.E. Hanson in the early 1950s, this 1000 real estate property was composed of many different lots. It was designated by its distinctive sign on Ventura Boulevard. At that time (and even more so now) people were so excited they were a part of such a renowned real estate community.

After some years, Lamond Chamberlain was named as the second major developer in 1956. At this point, A.E. Hanson turned over his rights to certain properties, selling all undeveloped land to Chamberlain. During the late 1950s, outdoor worship was developed, showing the importance of the nature that surrounded the community.

Hidden Hills is named for the hills that actually hide the community itself. From the long valley to the lush meadows and fields, Hidden Hills is quite a unique place. Back when the community was being developed, Hansen noted that you could see six-foot high mustard with red-winged birds gathering for miles. True to this day, the scenery alone makes Hidden Hills one of the most desirable places to reside in California. So don’t miss out on our wonderful, historic community!

Becoming Hidden Hills
It was not until 1961 that the small Hidden Hills community launched a petition to become a city, extending from Burbank Boulevard through to the community. At this time, the petition was signed by 79 percent of the voters and was approved by the Board of Supervisors. On September 19, 1961, Hidden Hills was officially declared a city that consisted of 1.3 square miles of land and 1000 residents who all resided in gorgeous real estate.

Hidden Hills is not only known for the beautiful surrounding hills, but also because of the unique and luxurious community, full of activities and events. The first Fiesta in Hidden Hills was on October 20, 1962. This Fiesta was to celebrate the first anniversary of the City’s incorporation and title. The annual Fiesta resembles the gathering of neighbors and celebration of this distinct city. This yearly event persists today, now consisting of a horse show with a roping exhibition by Monte Montana; a barbecue feast, and a teen dance for all to enjoy.